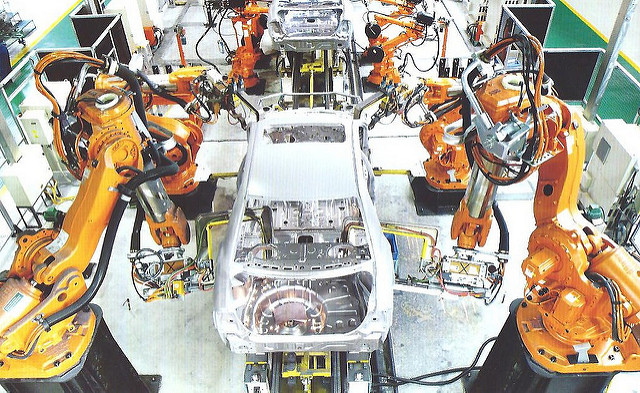 Factory owners feel the pressure to adapt fast. But where will human workers go?

Tepid wage growth has been frustrating Americans for years. But if trends in China’s manufacturing sector have any bearing on the US, there’s an upside to stagnant pay: Workers get to keep their jobs – for now, at least.

In China – where real wages have doubled in the past decade – the opposite is true: Manufacturers, squeezed by rising labor costs and a paucity of skilled workers, are fueling an unprecedented boon in the adoption of automated technologies to cut down on the number of workers needed on factory floors, according to the latest findings of the China Employer-Employee Survey.

Ironically, the Communist Party’s willingness to support unprofitable businesses is compounding problems for Chinese workers, as many manufacturers are barely profitable to begin with.

As Bloomberg explains, China is no longer the cheap labor haven it once was.

“Monthly manufacturing wages reached 4,126 yuan at the end of 2015, equal to those in Brazil but much higher than Mexico, Thailand, Malaysia, Vietnam, and India.

At the same time, many firms are relying on government subsidies, while barely eking out profits or even losing money, according to the study released June 20. “Time is running out fast for Chinese manufacturers to adapt,” says Albert Park, head of the survey’s international committee and a labor economist at The Hong Kong University of Science and Technology.

The study canvassed more than 1,200 companies and 11,300 workers in Guangdong, China’s biggest manufacturing province, and Hubei, a major industrial base in central China. Some 26 percent of workers left their jobs annually in Guangdong and that turnover rate was even higher for younger workers, about 37 percent for employees below 28.”

In a viral video published back in April, the People’s Daily provided a glimpse into the rapidly approaching future of China's labor force: The video, also released by the SCMP, shows hundreds of round Hikvision robots, each roughly the size of a seat cushion, swiveling across the floor of the large warehouse in Hangzhou. A worker is seen feeding each robot with a package before the machines carry the parcels away to different areas around the sorting center. The robots sort more than 200,000 packages a day.

One factory owner explains to Bloomberg how he’s adding 40 robots to his workforce that will eventually allow him to reduce his human workforce by 25% or more.